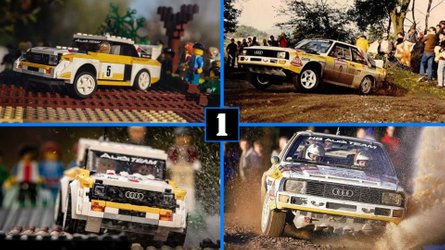 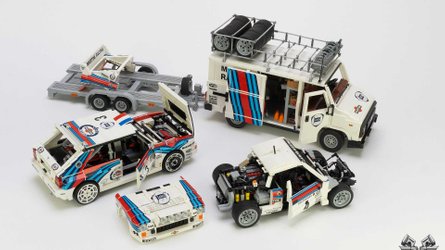 When automotive photographer Dominic Fraser found himself stuck at home unable to travel, he began thinking of alternative ways to shoot his favourite cars. He explains how, in the latest part of the #GetCreativeWithPorsche series.

As one of the UK’s leading automotive photographers, Dominic Fraser would normally be travelling the world shooting cars. But with travel restrictions putting a temporary stop to that, he found himself stuck at home with no creative outlet. Glancing around his house on the south coast of England, his eyes settled upon his children’s Lego and a hit Instagram series began.

“I’ve got house full of cameras that weren’t doing anything and I found it incredibly frustrating because all I wanted to do was create something,” explains Fraser. “Rather than doing nothing, I decided to use Lego’s Speed Champions models to try to re-create some of my favourite images from motoring history. I started with Audi and the quattro because we had that particular Lego in the house, but then I decided to model a series of Porsche images because the cars and the pictures are so iconic.”

“It’s been a more conceptual process than I’m used to with actual cars.” Dominic Fraser

A fan of the brand since he began photographing cars in 1991, Fraser’s interest in Porsche was helped in no small part by an early experience with rally legend and Porsche ambassador Walter Röhrl. “We were doing a shoot at the Motorsport Arena Oschersleben and we needed some in-car shots of the 964 race car,” he explains. “Walter was more than happy to drive me around, and the memories of the speed and the noise have never left me. Needless to say, I was holding on with great difficulty! The man is a legend.”

While he’s not had bad weather, traffic or technical problems to deal with, shooting with Lego has still had its challenges. “If anything, it’s helped my photography because I’ve really had to think about the technicalities of the shot, and to visualise exactly what I’m trying to capture,” he says. “It’s been a more conceptual process than I’m used to with actual cars – in real life, you shoot much more in the moment.”

“Once I’ve settled on an iconic shot to recreate, I study the details and think about what I can actually see. It’s amazing how much the brain fills in gaps with a normal photo, but with the Lego images it’s a bit different. To recreate the image of the 919 Hybrid in the pit garage, I had to think long and hard about the technicalities of the shot and what I was trying to capture. There’s no track so I can discount that, even though I know it’s there, and the grandstand is miles away. With the Lego, I needed to bring the grandstand closer and then play with focal lengths because the recreation needs to have as many elements in focus as possible. In real life, you can blur the grandstand out and the reader’s brain will fill that gap with its assumed knowledge. Not so with tiny plastic bricks.

“I also needed to position things so that they look correct in the camera frame. There’s a lot of trial and error to make sure the scene looks realistic – the lighting angle is really important so if you’re trying this at home, pay close attention to where the sun is. The lighting position is vital for replicating a shot – especially this one - so I positioned a torch to mimic the sun peeking through at the top of the frame. None of this impacts the photographer on a real shoot because they are just focusing on the moment, but when you have to actually build the scene, it makes a massive difference.”

The 917K at the Goodwood Festival of Speed

“The first thing I did to recreate this image was to make sure the whole set felt correct. The startline at the Goodwood Festival of Speed is so iconic that you can sometimes forget the details that make up the scene – I’ve been there loads of times but still had to remind myself. Simply by building the straw bales and tress, along with the start gantry, you instantly create that sense of Goodwood.

“Then it was a case of applying some of the skills I’ve learnt in my day job to create a way to take a car-to-car tracking shot, but in miniature. The blur comes from a slow shutter speed and a camera mounted on a tracking ‘car’ running ahead of the 917 – just as it would in life size. To ensure everything stayed in focus, I tied a piece of string between the 917 and the camera car so that the two were pulled along at exactly the same speed. Afterwards, I simply removed the makeshift tow-rope with editing software.

“I was quite pleased as this was the only ‘post’ alteration that I had to do. Unlike in reality, no shots were made up of several photographs comp’d together, and there was no need for special editing effects.”

“If you look closely at the iconic 930 Turbo image – originally shot by Jeff Zwart and famously appearing as a backdrop in the US sitcom ‘Seinfeld’ – you’ll see the car kicks up some dust in the original photo. I really wanted to show that in the Lego shot because it would make my recreation even more realistic. I sprinkled some grit over the Lego floor and then used a camera sensor blower to ‘puff’ the dirt into the air.

“It’s important to think about the background in your image. The original shot I was working on here has a blurred-out landscape so I decided to set this scene up in my garden. The bushes at the bottom of my garden are the right shade of green and because they’re far enough away, I managed to blur them out so that you can’t make them out in any detail – just like in the original.

“The final trick with this image relates to the wheels. When a car jumps in real life, the wheels drop out of the arches because the suspension drops. Lego models don’t have any springs or dampers, so to make the wheels appear lower, I built a second ‘false’ floor. It was then simply a case of suspending the car with some string – which I edited out afterwards using Photoshop – and pressing the camera shutter release. It’s these little details that aren’t easy to spot at first but they make all the difference in a realistic recreation.

“If anyone wants to try this at home I recommend using a pair of tweezers to put the stickers on: it’s time consuming but worth it because when you’re focussed on the car in such detail, you notice when something isn’t quite right.”

If the accuracy of Fraser’s final images are anything to go by, it’s a tip worth noting.